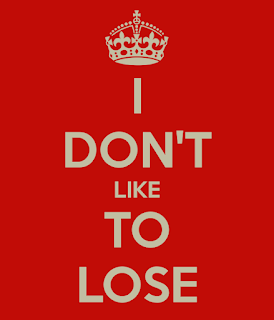 "Well, it's not that, it's--"
She cuts off my poor attempt at an explanation.
"That wasn't a question," she said.
"It was a statement. You don't like to lose."

Ouch.
I mean, how dare she read me like that?!

I deserved it, I'm sure. It really knocked me up side the head because I didn't realize how competitive I was until she pointed out that the root of the stress caused by my latest personal debacle was about losing. I remember being a sore loser as a kid. My mom and I would play scrabble and she was always so great and she didn't let me win just because I was kid. She wanted me to learn all the fancy 50-point words she was laying down. She'd make me look them up in the dictionary so I could be better at scrabble (and vocabulary) in the future; but I couldn't see past the pain of losing against her to appreciate the lesson. Once we'd tally up the score, I'd throw all the pieces down, turn over the scrabble board, and storm out of the room! (Sorry Mom 😬I was a brat!)

Oh, how I wish I could storm out of life right now. That's how sore of a loser I am.

It's not just the reality of being unable to accomplish something I've invested in--a career goal, an academic pursuit, a hobby...a relationship--that kills me; It's that I feel as if I've lost. It weighs on my spirit because I want to believe I could've done better...or more...or something.  I could've changed the outcome if I had just known the right words to lay down on the board.

There are going to be seasons in all of our lives when we're not hashtag winning. 2016 was a #winning year for me. I fell in love with myself over and over again, and in many different ways. I performed across the country, I released new music, I started seminary, and I fell in love with a person. 2018, however, is a #rockbottom year. It feels as if I've lost the glow, as if I'm struggling just to get by. I feel like a part of my soul has died as I've continued to journey into the unknown abyss of this calling, exhausted by the task of carrying around this rotting corpse of who I used to be. I feel like...a loser.

"You don't like to lose," my therapist said.
She's right.
It's time to let go.