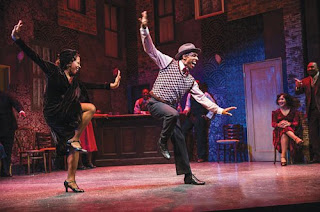 Today (December 1st, 2020), Facebook reminded me that 5 years ago, I wrapped up a 5-week run of Ain't Misbehavin' at Portland Center Stage in Oregon, and flew back to New York City to re-enter my life there. I had just applied to seminary a few days before Thanksgiving and was excited about the possibility of leaning into this strong calling I felt to deepen my theological knowledge. I was still under the illusion that I'd be able to maintain some sort of performance career, so I kept my manager, Greg, and he'd continue sending me out on auditions. I was becoming very picky about what I'd say "yes" to--
Would I go on that national tour of Hamilton that he wanted to send me on or would I go to seminary? Would I leave to do a 9-month stint in After Midnight on an international cruise ship or would I go to seminary?
That was the question over and over again. I decided that I'd still do local stuff in NYC or short stints in other cities. Even as I entered seminary in fall of 2016, I never imagined that I'd be where I am today--
-an Associate at a well-known church in Charlotte, North Carolina
-a minister, licensed at the church I loved and adored in Harlem and where God called me out of hiding in the balcony and ushered me into the mystery
-ordained at a church that loved on me and nurtured me throughout seminary, led by women of color
-living in another part of the country that I'd literally never been to before I was flown in for my final interview
I couldn't have written this story 5 years ago--or 3 years ago--or 2 years ago--if I tried!
Thus enters the question of the decade--one that has dominated interviews and first dates--one that has lingered and caused great anxiety as I fumble over the words to a response that I don't quite believe:

"Where do you see yourself in five years?"