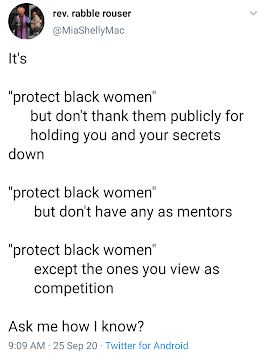 God revealed something to me last Thanksgiving that is resurfacing now.

Amidst the turmoil of

I found myself coming back to what God spoke to me last year:

I don't have anything profound to say in this post beyond

Time's up for expecting people and systems to be anything other that what they are--what they've been.

Time's up for expecting forced accountability to save *us.

Time's up for holding folks who don't hold us back.

Time's up for investing in people and institutions where the ROI is limited or non-existent.

Time's up for forcing blood to be family.

Time's up for making space for mediocre leaders who fail us.

Time's up for love affairs with a yesteryear that was oppressive, at best --

Time's up for toxic charity --

for our obsession with a philanthropy that is never enough.

Time's up for clout-chasing Celebrity Activists™ and

Punchline Preachers who yell "Protect Black Women" on Sunday but continue upholding the                 patriarchy and misogynoir on Monday-Saturday.

Time's up for the lies

for the backroom deals that lead to front-room foolishness

for the gaslighting when *we call a thing a thing

for believing that this is the greatest country in the world

Time's up for anything other than a radical revolution.