Martyr in the Mirror

February 22, 2015
I always knew I was different. As a kid, I vividly remember watching the other kids play outside from inside my living room window. I was kept inside for a myriad of reasons. Perhaps, my mother was afraid that a serial killer would come and snatch me away if I were to play in the backyard alone. Afterall, a man did put a gun to my head in front of my home when I was five years old. Mostly, I believe that I was kept inside because there was always so much to do--so much to prepare for. If it wasn't piano lessons, it was practicing for piano lessons. It was dancing school, gymnastics, violin lessons, choir rehearsal, and by age 10, I was rehearsing and performing for something at least 5 days a week. The older I got, the more responsibilities befell upon me. The busier I got, the less birthday parties and social events I could attend. I remember being so disappointed when I had to tell the most popular girl in elementary school that I couldn't go to her sleepover because I had violin lessons early the next morning. Forget homecoming dances and prom. I said goodbye to childhood. My life became about sacrifice. At an early age, I became a martyr for my craft.

We are taught to look back at our childhoods to find clues about how we've become who we've become. I took this martyrdom to college. I studied hard, rarely partied, became the best music director/dictator on campus, worked 3 jobs, never dated, and graduated Magna Cum Laude. And for what? A few notches on my resume and an exciting stint on unemployment? Truth is, I'm still that kid that watches the other kids play from inside my window; but we're adults now, and with each passing year, my chance of joining them decreases. I've killed myself over and over again for something that may or may not be a passion of mine anymore. Those hours upon hours of practicing the piano, in the dance studio, on the basketball court, and onstage, didn't make me great; they made me lonely. They made me introverted and far too modest for an industry and city that requires a robust ego. They made me a perfectionist and a prisoner at the same time. I became incarcerated by my desires to be the best, to do the most, to aim the highest, to run the fastest, and I've fallen the hardest.

For the past 15 years, I've been running full speed in circles, going nowhere FAST!
The racetrack got smaller and smaller as I sprinted faster and faster in the direction of NOWHERE. I'm at the point of collision, where the slinky has spiraled out of control and has hit the ground hard, bouncing for a few seconds, fighting to retain its kinetic energy, but ultimately failing as all momentum stops and it is forced into a period of rest.

I'm resting. I'm forced into resting. I'm learning (trying) to rest. These moments of stillness ache. I'm not quite sure if they ache because I'm still, or if they ache because my stillness is not comforted. Or if I ache because I've been deeply bruised and battered by this thing called life. I so desperately want to lay in the arms of my non-existent boyfriend, and I finally don't feel guilty about expressing that desire. I no longer feel as if I'm cheating on God. I've ignored this part of me for so long, sacrificing love for incarcerating dreams. As I rest in God's presence, I long for a physical touch that'll remind me that I'm still here and that I can still feel good things that aren't aches and pains.

She says I need Jesus. He says it's a quarter-life crisis. Many have their opinions, but I know depression all too well to rename it something more comfortable for others. It's ugly, it's common, and we avoid talking about it. My crippling martyrdom has led me to a place that has seemed almost impossible to crawl out of, yet, I'm slowly pushing forward on my hands and knees. I look back at my childhood and wonder what I was doing it all for. Surely this must be apart of some grandiose plan that God has for my life--some promise that has yet to be fulfilled. And then I sit here wondering if I've misread the promise all these years. In all of my busyness and martyrdom, did I miss a word from God? Is this pain necessary for the promise? Is there an endgame to these 15+ years of sacrifice? Will I ever play with the kids outside?

(And maybe it's deeper than playing outside. Maybe I'm called to something that made the sheltering necessary. After all, I played with the kids a few times in my early 20's and it was grossly overrated.)

Today, I made the choice to not be a martyr anymore. I will go where life takes me, where I feel like going, do what I feel like doing, and love who and what I feel like loving. I will cry in public. I will stop faking my smiles. I will do these things FOR ME, not my crafts. If I wanna play outside today, I'll take off my church shoes and dirty my white stockings.  And maybe tomorrow I'll decide something else. Who knows? 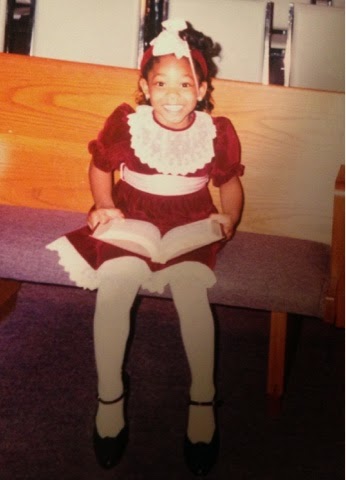