Surviving the Community that Supports R. Kelly (and Men Like Him)

January 06, 2019
Read Finding Love After Sexual Assault Here
_______________________
My brilliant colleague, Danielle Williams Thiam, preached a sermon this fall on the rape of Tamar (2 Samuel 13). In her sermon she pointed out all the ways in which, not just Amnon, but the community and world in which Tamar lived participated in her rape. "Rape is a communal sin," she preached. I honor her words as a sexual assault survivor and as an advocate for holding the collective responsible for the violation of women's bodies, particularly the bodies of black and brown girls.
______________________

For every person who knew that Deacon so-and-so (who was in with the pastor) was touching little girls and turned their heads cuz they didn't want to 'fall out' with the pastor-
REPENT.

For every person who stood outside a closed door knowing that what was going on behind that door involved an abuse of power that ravaged a female body-
REPENT.

For every lawyer who knowingly defended a guilty predator for the sake of a fat check-
REPENT.

For every person who provided a false alibi for a "friend" they knew was up to mischief-
REPENT.

For every person who's asked a victim, "What were you wearing?"-
REPENT.

For every person who has murmured, "well, she's fast," "she doesn't look like a child," or "she enjoyed the attention"-
REPENT.

For every person who's blamed sex workers for their assault, as if their way of making of living warranted the brutal disrespect of their body, mind, and spirit-
REPENT.

For every parent who chose their child's abuser over their child-
REPENT.

For every male contributing to "locker room" or "water cooler" conversations that objectify the female body-
REPENT.

For every person who said, "that's none of my business"-
REPENT.

For every person who voted for the proud sexual violator that is currently running ruining this country-
REPENT.

For every campus security department that has launched an "independent investigation" on a college campus only to force dropped charges because alcohol was involved or because the perpetrator was white/weathly/an athlete-
REPENT.

For every colleague who turned their head when female PhD students struggled with abusive and inappropriate male advisors, some getting dissertation proposal rejected and being forced out of programs-
REPENT.

Will the cohort of communal sinners ever own up to the ways in which they've continually failed women and girls?

Add your call for repentance in the comments. 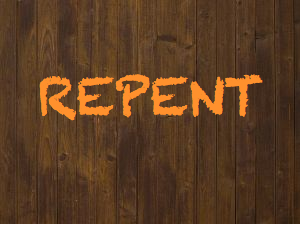