Recently, my little brother got engaged. 🎉
But can I just say, Hashtag Triggered?! 😑

I was very thrilled that he finally proposed to his now fiance and that I absolutely love her. She is so sweet and brings goodness into his world. I'm so excited for them. However, during my last trip home to New Orleans, a family member was chatting with me about it and asked about my relationship, and then proceeded to say,
"I thought you'd be next." 😣 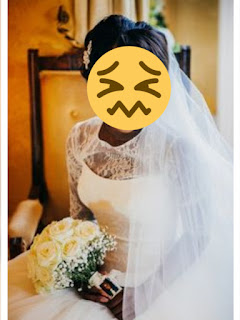 I did not say this aloud as I was in my father's house (#shondo #imchurchy), but everything in my body tensed up. Every hair stood up on my boiling skin and my heart began palpitating as I attempted to calmly explain why I wouldn't "be next" while simultaneously trying not to burst into tears in front of company. I started rambling about my burgeoning career--about "our" careers--and attempting to refocus the conversation while wanting to jump into the large pot of red beans simmering on the stove and melt amongst the pork fat.

This person meant no harm, I'm sure of that, but my body wasn't sure of it. My body screamed as beads of sweat began forming below my baby hairs (so much for layed edges🙄).

I don't just sit around thinking about marriage. I was never a person who obsessed about it (though Say Yes to the Dress used to hold me hostage on the couch for hours). Although I'm a few months out from 30 (I am both relieved and anxious about this fact), my thinking about marriage has less to do with age and more to do with circumstance. I had talked about it with at least two previous partners. However, I began thinking seriously about marriage during my last relationship. There was even an in-depth conversation that had a timeline. But such is life. I can't dwell too much on such things. Life happens and the timelines get thrown out of the window like a smoked-down black-n-mild getting tossed out of a speeding Impala with tinted windows.

Life has happened to me. And the happenings haven't been all bad. I won a preaching award this year, I got offered an interim ministerial position at a church, I am 7 credits shy of my Divinity Degree, I am a research assistant for one of the most dynamic professors at my seminary, and I'm finally not insanely broke. I'm back in the gym, though working around some injuries. I cook more and drink less. Life has happened to me, and the happenings have been great; Yet, in that moment of both inquiry and condemnation--we'll call it a condemnatory inquiry--I felt as if all I had achieved this year got thrown out of the window because my left hand is bare and my last name is still McClain.

People in my family don't ask about my career often, especially now that I'm in ministry. Very few ask about school, about my PhD pursuits, about my preaching ministry, about my ordination process. These are all things happening in real time, not the future.
You know what they ask, though?

"Any dating propects at the church?"

"Do you have a special someone yet?"

"What happened to ole boy?"

"Ya know it's gonna be hard to find a man who can handle a pastor."

In the midst of all of the condemnatory inquiries, and no matter how secure I think I am, I manage to always feel like a failure when I'm accosted by this topic. It doesn't matter how well I play it off in company, the tears eventually soak my pillow that night. It doesn't help that I'm the oldest granddaughter on my dad's side of the family (which is heavily populated by men, and their weddings/marriages don't get the same attention), or that I'm the youngest and only unmarried cousin on my mom's side of the family. So, basically everybody's waiting for the wedding of the century (And they're in for a huge surprise 'cause half them heauxs ain't gon be invited🤷🏽‍♀️).

My ex and I are cool, though he's able to laugh about it in a way that I can't. He and the other unmarried men in the family have a way of brushing this off in a way that makes people leave them alone about it (at least in company). But, no matter how many academic successes I have, or how many preaching engagements are on the calendar, or how many letters are behind my name, there are apparently letters missing in front of my name and I have internalized other people's discomfort with that. For many folk, M.Div, M.A, and B.F.A will always be inferior to Mrs. There are people waiting to give me wedding gifts, and ain't given a damn thing towards these 3 degrees. 😡😓

I'm learning to deal with all of this, and am crafting witty responses that won't get me excommunicated from the family. Lol It's a process. Confronting your insecurities is a process. :insert impatient sigh here:

Months ago, my best friend got engaged on the weekend stuff got rocky in my life. She couldn't even tell me the good news because I was so distraught. As I prepare to officiate her upcoming nuptials, I think about how kind and sensitive she was/has been in delicately sharing her joys with me amidst my spiraling concerns--how she thinks before she speaks and, amidst planning a wedding, has found space to hold me in my #BitchMeToo moments.

She, among many others, thought I would have figured this part of my life out by now--not because I'm 30 but because I'm Mia💁🏽‍♀️. I've always figured things out. I've always had it all together (or at least put on a good show like I did). Yet, here I am--sitting with what feels like failure even though I know that I'm not a failure, and screaming #BitchMeToo into my pillow at night so that I don't have to curse nobody out in these streets, all because I simply have not figured it out. I have not lived up to the expectations I placed on myself (influenced by those around me, of course). And I'm knee-deep in a season of self-confrontation, deconstruction and reconstruction as I figure out the next moves--the next city I'll live in, the breed of dog that I'll get, the apartment/house I'll probably have to save for alone.

I'm good though. Trust me when I say, "All is not lost," relationships and self-love included. I'm living my best life (ain't goin back and forth with you ni**as). I'm gon be alright, and you will too...in Jesus' name.