February 19, 2017
When I was 8, I went to a cousin's wedding in Lansing, Michigan. My mom and I stayed after the wedding festivities to sight-see. One afternoon, we were walking to the public bus and it flew passed us to the bus stop, a good distance away. My mom told me to run! I took off jogging, casually. Frustrated and annoyed, I stopped running. I turned around and proclaimed that I was tired and our efforts were futile. She told me to keep running. Rolling my eyes, I took off in a light sprint and the bus driver was gracious enough to wait for us to catch up (this clearly wasn't anything like the brutal NYC transit operators who could care less about you). We winded-ly climbed on the bus and to this day, my mother uses this story to lecture me about the benefits of not giving up--of not quitting. 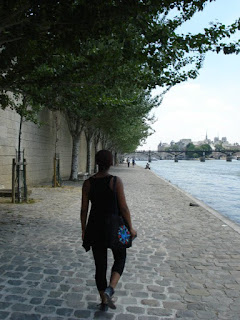 Although my mother would never want me to stay in a toxic situation, that experience has shaped the narrative around my vigorous fight against being labeled "quitter."

I'm an overachiever. Surprise! My type-A personality isn't an accident. It wasn't nature; it was nurture. Harangues against quitting are weaved into our adolescent lives through educational practices, athletics, and even biblical narratives that thrive on perseverance and determinism. Perhaps, it was my overenthusiastic desire to never miss the bus...to keep running despite the costs...to never quit, even if it meant losing my sanity. Last October, I quit. I took a deep breath and walked away from everything I knew about Sunday mornings, begrudgingly embracing a new freedom. It was like going through a bad breakup--a separation that you'd been avoiding for months because, let's face it, abuse becomes home and joy becomes the high you try to recreate, and peace is an eschatological reality only achieved in death. Abuse becomes us. Weariness becomes us. And freedom? Freedom cracks open our dysfunctional foundations, causing us to fall deep into the unknown of ourselves. This wasn't the freedom I was waiting for. In fact, just as I'd wrestled with my calling into ministry from 2011-2015, I wrestled with this new freedom--this new rest. I'd become so used to slavery that the prospect of freedom seemed painful. I became so comfortable in the captivity of "serving the Lord" and the toxicity of environments that were supposed to be healing spaces that I stopped growing. I stopped giving cheerfully. I stopped loving myself and I stopped loving ministry.

I Quit Church in October--not because I was trying to make a statement or attempting to garner a pity-party. I quit because I realized on the bus from Laguardia Airport to Harlem, that I was allowing my sanity and my gifts to be castrated "in the name of Jesus." It might not've been intentional but it was damaging to the greater calling on my life. As I began to empty my hands of the things that made me comfortable--of the things that filled my calendar and, temporarily, fulfilled my duty as a servant of the Lord--, I began to receive things that I'd never imagined. The free time made room for me to deepen my studies, for me to explore new relationships, and for me to figure out who God was/is calling me to be in this era of my life. 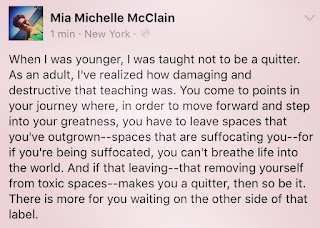 I quit because some fiber in me couldn't stand fighting to be in a space I'd outgrown. When I was younger, I was taught not to be a quitter. As an adult, I've realized how damaging and destructive that teaching was. You come to points in your journey where, in order to move forward and step into your greatness, you have to leave spaces that you've outgrown--spaces that are suffocating you--for if you're being suffocated, you can't breathe life into the world. And if that leaving--that removing yourself from toxic spaces--makes you a quitter, then so be it. There is more for you waiting on the other side of that label.

I realized that there was more for me...and as I soon I realized that, doors began to open, dreams began to come true, and prospects that were future-oriented became facts of the present. I don't know about you but when I walk into an unforeseen door that God has opened, I get excited because I know that walking into that door means walking into myself. Emptying my hands in October meant more than just "quitting." It meant preparing for my future--it meant leaving space for the assignments that God and the universe were placing upon me. I, now, find joy in being a quitter. I love my mama, but forget what she said in 1997. I'm no longer begrudgingly jogging for the bus. I'm enjoying the marathon that is life and stepping into myself, stride by stride.