In & Out of Grief

March 08, 2016
Last night I had a dream that I was digging up the grave of my close friend--my Leo. I always research my dreams and write them down if I can to keep track of the insanity that goes on during my slumber. I feel like I should have a dream interpreter on speed dial...or maybe I just need to visit my therapist--it's been a while. But, I digress.

Halfway through the thought, "I need to call Leo," I'm reminded that this is not an option. I used to have that thought quite often after leaving an incredibly frustrating music rehearsal or randomly hearing a Diana Ross song come through my headphones (he was her biggest fan!). I still have that thought, quite often. I am, however, bombarded with the reality that I will never be able to call Leo again, that I'll never hear that voice again in this lifetime. I had a panic attack when I thought I had accidentally deleted his final voicemail to me from my phone. I'm trampled by thoughts of burying him merely two days before my birthday. I was too grief-stricken to celebrate last year. I wonder what my birthday holds for me this year. Another year. Without him. He'd be proud of me, I'm sure. He'd roll his eyes at me upon hearing that I'm following a newly excavated life passion and going to seminary. LOL He sometimes scolded me for "doing too much" but always supported my various endeavors. He told me that I'd succeed at anything I put my heart to and energy behind. He said that would make it difficult for me to settle on one life path because I succeeded at so many things. He was right. None of my crazy decisions or my self-doubt could keep him from believing that the best version of me was attainable, however wide or long my dreams were.

I cry because I'm so blessed to have been deeply graced by his presence. Who decided that I would be lucky enough to cross paths with a hero? Life goes on. It has. I still smile about the good moments and weep about the bad. I try my best to keep up with his aunt and his other close "children." I feel like it's my duty to maintain those familial relationships in his honor. He would've wanted that. He taught me that family overrides everything, including career, which was one of the reasons why I passed on the final callbacks of a popular Broadway show to bury him and commune with those he loved. He shines on forever through us--his kids--and lives through our words, our dances, and our songs.

I've been in and out of grief and depression since his death. I sip this French Rose and reluctantly converse with God about how "this too shall pass." I've moved on...a bit...or at least I've convinced myself to allow my "night" to pass--that my weeping is over (for now) and that joy has come in the mo(u)rning. As God is fighting this Rose for my attention here on earth, I wonder what God and Leo are up to in heaven. Surely Leo is dancing around in a low cut dashiki with some handmade "African" jewelry around his neck and hands and singing about the 7 principles of Kwanzaa. It's because of him that I love my blackness so fiercely, that I fell in love with Diana Ross, that I wanted to be Valerie Simpson, that I learned to give so freely, as he did. I wonder if this anxiety that I'm currently feeling--this #MarchMadness--and these dreams/nightmares I've been having are connected to the upcoming anniversary of his death. What did the digging up of his casket mean? I look forward to sleeping and fear sleeping at the same time. Is this apart of the grieving process? Is this my reluctance to move on? I'm lost in the questioning, wandering in and out of grief.

Signed,
in & out of grief 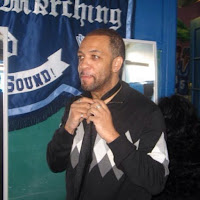 Wine of the Week:

A light, rounded semi-dry Rose. Unlike the harshness of a Spanish Rose, this varietal has a smoothness that goes down easy. It is paired best with milder proteins.