March 23, 2015
Explicative & candid accounts of the tumultuous dating and relationship experiences of me and my girlfriends. ---

II.
One man told me what he wanted...kinda.  I went on a date recently with an educated, self-absorbed, self-proclaimed nigga. Yes, he referred to him as half nerd-half negroid. His behavior was jarring and completely unattractive, and he expected me and everyone around him to accept his loud and obnoxious mediocrity. In the midst of his intelligence lay so much ignorance. Apparently, according to him, most men want a fat ass that doesn't talk back. So, he basically wants a chick that'll hold him down, as long as she doesn't share her true opinions on his emotional and social impotence. The first date was also the last.

III.
My friend was telling me about a guy that asked her to set him up with one of her girl friends. She asked him what he liked. He sent her a bullet-point list of 'bout 72.5 million things he liked and wanted in his woman. "I want a light-skinned girl...with long hair...who's educated...and has a fat ass...can cook...and is God-ly...," etc. Now, when she asked him to set her up, she listed 5 things she was looking for that were potential deal-breakers if the man of interest didn't posses one of those qualities/attributes. One of her things was/is, "he must be 6'0 ft or taller." Now, she and I disagree on this. I've actually never dated a man taller than 5'10, ha! But if that's her thing, then so be it. The point is, the guy that was setting her up told her that she was asking too much! Umm, excuse me? After he basically requested a college-educated video-heaux, who could also step back into the 50's and starch his shirts before having bacon, eggs, and grits ready every morning, he had SOME nerve saying that her ONE request was too much and that she should lower her standards. Educated, heterosexual black men know that they are a commodity. They could be mediocre in every way and still have women lining up to date them...or their bank accounts. Many walk through the universe knowing that they could get any woman they want--long hair, short hair, dark, light, skinny, thick. I think part of their hesitancy to commit is that there's so much stimuli. Conversely, the pool for black women seems considerably smaller. I read an article the other day that said black women receive the lowest number of messages and flirts on dating apps and websites. I wasn't surprised at all. We are told to bend and compromise in our quest for a suitable life-partner. I think I've done enough bending for 3 lifetimes. I wonder what it would look like if men had to bend a little lower, look a little deeper, relax their standards, or ask for a little less than perfection from their ideal woman. But I digress.

IV.
Speaking of online dating, people always tell me to leave my options open in terms of dating outside of my race. Just to be clear, I've never shut the door on someone based on skin color. My issues with other races is cultural. Dating an Egyptian can have the same struggles as dating an Australian or a Puerto-Rican. There can be cultural discrepancies that make getting to know that person uncomfortable. But I'm really here to talk about white men. Every message I get from a white man on a dating app or website kinda sounds like this: "Hey sexy. Looking to get to know you a little better. What are you doing tonight? If you're free let's meet at the (insert hipster spot in Brooklyn/East Village here) and see if we connect." Now, if that's not the most generic "I send this to every girl" message in the world, I don't know what is. What the hell kinda black woman is gon meet you in Williamsburg at 9:30pm for a 1st date at an over-priced, glorified, dirty college bar? If you'd read her profile, you'd have known that she doesn't go on first dates at night anyway.  Now, before you call me racist, just hear me out. I'm a student of the movement that interrogates the objectification of black women and their/our bodies. From Sarah Baartman to Nicki Minaj, I've watched black women be victimized by a white, patriarchal society that will rape you for pleasure and power but not claim your illegitimate child. So, excuse me for being apprehensive, but my track record with white men on dating sites isn't the greatest, and the track record  of my ancestors could be enough to prevent me from ever taking a white "love" interest seriously. The amount of inappropriate sexual language used (by all men) in communicating their intent is disturbing, predictable, and off-putting. But I digress. To be continued. 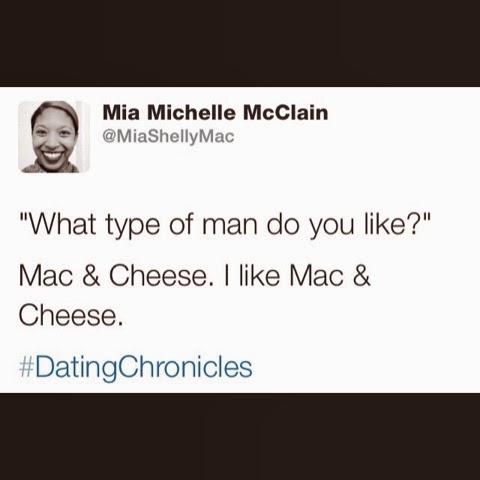